Background: Poly-(ADP-Ribose) Polymerase (PARP) plays a central role in recovery from single-strand DNA (ssDNA) damage via base excision repair. When PARP activity is inhibited by a NAD+ mimetic analog, ssDNA is converted into a Double-Strand Break (DSB) during the S-phase in a cell cycle. However, the DSB site is repaired in a process of Homologous Recombination (HR) that is derived by genes such as BRCA1/2, PALB2, and RAD51. Under conditions of HR dysfunction, including mutations of BRCA1/2 (called BRCAness), PARP inhibitor (PARPi) induces “synthetic lethality” in BRCAness-specific cancer cells. Indeed, clinical trials using forms of PARPi that include olaparib, veliparib and rucaparib, have revealed that PARP inhibition produces a dramatic effect that actually arrests cancer progression. Its clinical efficiency is limited, however, due to the acquisition of PARPi resistance during long-term use of this inhibitor. Thus, it is important to elucidate the mechanisms of PARPi resistance.

Results: CDK1 is a critical kinase for 5’-3’ DNA end resection, which is important for generating ssDNA for recruiting HR-priming factors. CDK12 is necessary for the transcription of HR-driver genes, such as BRCA1, BRCA2, RAD51 and ATR via the phosphorylation of RNA Pol-II. PLK-1 participates in driving HR via the phosphorylation of RAD51. The PI3K-AKT-mTOR signaling cascade is involved in BRCA1 induction via an ETS1 transcriptional pathway. Even under ATMdeficient conditions, the ATR-CHK1 axis compensates for loss in the DNA damage response, which results in HR recovery. The HGF receptor Met tyrosine kinase is responsible for promoting DNA repair by activating the PARP catalytic domain.

Conclusion: These kinase-based signaling pathways are biologically important for understanding the compensatory system of HR, whereas inactivation of these kinases has shown promise for the release of PARPi resistance. Several lines of preclinical studies have demonstrated the potential use of kinase inhibitors to enhance PARPi sensitivity. We emphasize the clinical importance of chemical inhibitors as adjuvant drugs to block critical kinase activities and prevent the possible PARPi resistance. 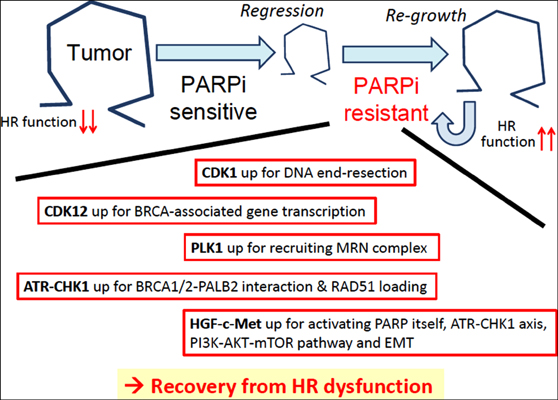