Background: Dedicated wavelength utilization and the isolation of control plane from the data plane are the important features in the design of Optical Burst Switching (OBS). The contention in bursts, link congestion and the reservation cause the burst dropping in optical networks. The slotted time and the burst assembly models incorporate the wavelength assignment and the channel reservation schemes to reduce the dropping probability. The reservation of resources prior to burst arrival and the additional delay due to the burst assembly and the offset time are the major issues in the reduction of probability. Besides, the traditional one-to-one packet transmission consumes more time due to a large number of packets handling.

Materials and Methods: This paper proposes the novel OBS model that incorporates the three processes such as Open-Flow (OF)-based Orchestrator Live Node (OLN) modeling, fuzzy logic based ranking and the offset time-based reservation (without/with void filling) to overcome the issues in the traditional methods. Initially, the OLN modeling based on OF analysis includes the Flow Information Base (FIB) table for the periodical update of the link information. The fuzzy logic- based ranking of channels followed by OF-OLN predicts the status of the wavelength such as free, used and conversion. Based on the status, the channels are reserved without and with void filling to schedule the bursts effectively. The reservation scheme employs the Offset-Time Burst Assembly algorithm to allow the resource reservation prior to burst arrival. Through these processes, the reuse of wavelength and the reallocation of resources are possible in OBS.

Results & Conclusion: The controlling of maximum burst transfer delay by the OTBA efficiently reduces the end-to-end delay for data traffic. The comparative analysis between the proposed OLN-WR with the existing Hybrid Burst Assembly (HBA), Fuzzy-based Adaptive Threshold (FAT) and Fuzzy-based Adaptive Hybrid Burst Assembly (FAHBA) in terms of end-to-end delay and transmitted amount of bursts assures the applicability of OLN-WR in scheduling and communication activities in OBS networks. 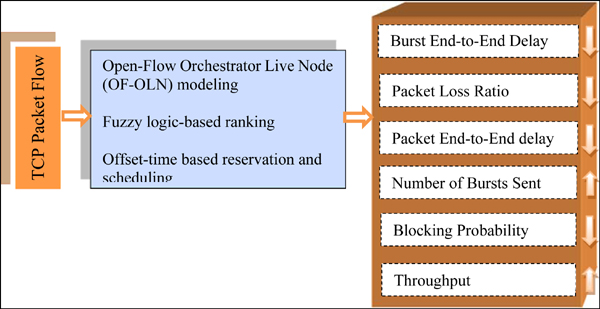